The central area of Tuscany is exactly as you would imagine it: picture the green hills and the cultivated fields that made this part of Italy so famous all over the world, and that’s exactly what you’ll see once you get here. On the area once reigned Siena, the historical rival of Florence: the city today is famous all over the world for its Palio and for its beautiful old town, part of UNESCO World Heritage.

Florence and Siena are two sides of a coin: the capital of Tuscany has known its golden age during the Renaissance, Siena, on the other hand, is the quintessence of Italian Gothic, the luxuruant architectural style opposed to the Romanesque in the Middle Ages. 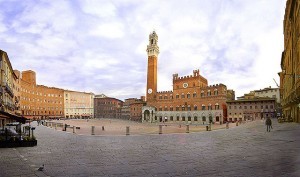 Piazza del Campo. The beating heart of the old town, today as in the 12th century, will astonish you for the beauty of its pavement: this shell shaped square is divided into nine wedges, each representing one member of the Council of the Nine, who ruled the town at the time of the square’s construction.
The Fonte Gaia is placed on one side of the square: this fountain was built in the 1346, and is adorned by the panels sculpted by Jacopo della Quercia in the 15th century. The ones you’ll see there in open air are actually copies, the original are often on exhibit at Santa Maria della Scala’s museum, to keep them from damages due to weather.

On the opposite end of the square you’ll see Palazzo Comunale, once seat of the Council and political centre of the city. The palace, built in 1297, is one of the masterpieces of the Italian Gothic, with its concave facade that counterbalances the convex shape of Piazza del Campo. Upon the palace rises Torre Mangia, a 102 meters high tower: climbing its about five hundred steps you’ll get a terrific view of the whole city, but keep in mind the wait to be allowed in will be long: the tower can only accommodate 30 persons per time.

Museo Civico. Located inside Palazzo Comunale, the civic museum of Siena is the most important museum of the city: just roaming among its rooms will be a wonderful experience, thanks to the frescos that adorn them. Your visit starts on the first floor with the Sala del Risorgimento, that celebrates the main events that led to Italy’s unification. The following halls, Sala di Baia, Anticamera del Concistoro and Sala del Concistoro host frescos by Rolando Bandinelli, Ambrogio Lorenzetti and Domenico Beccafumi, three of the main exponents of Sienese School. You’ll pass by the Anticappella and the Cappella to get to the Sala del Mappamondo, where the most importants works of the museum wait for you. Maestà (The Majesty) by Simone Martini portrays Virgin Mary with the infant Jesus on a throne: this is the first known work of Martini, the master of the Sienese School. The adjacent room is the Sala della Pace which hosts a series of frescos by Ambrogio Lorenzetti known as the Allegory of the good and the bad government. Complete your visit climbing the stairs to the loggia that overlooks the market square and the countryside.

Duomo. Siena cathedral is the most typical example of Italian Gothic architecture. The whole complex includes the Battistero and the Crypt. Within the cathedral you’ll have the chance to visit the Opera del Duomo museum, where the artworks once part of the Duomo decor are on exhibit. Discover more about the Duomo

Santa Maria della Scala museum centre. Built in the 13th century to serve as guest quarters for the pilgrims who traveled on the Via Francigena, this building today hosts three different museums: the Archaeological Museum of Siena, the Art Museum for Children and the Centre of Contemporary Art. The main attractions of the whole complex are though the Pellegrinaio on the first floor, a hall adorned by the fifteenth-century frescos by Lorenzo Vecchietta, Priamo della Quercia and Domenico di Bartolo, and the original panels of the Fonte Gaia, sculpted by Jacopo della Quercia on display at the third floor.

Pinacoteca Nazionale. This art gallery is located inside Palazzo Buonsignori, a thirteen-century building in Via San Pietro. It’s not the Uffizi, but Siena’s Pinacoteca is huge and fascinating: while in Florence the Renaissance reached its peak, in Siena the artists of the Sienese School still followed the principles of Gothic Art, as if the historic rivalry between the two cities needed to leave a mark also in art history. If you have enough time lose yourself among the vast halls of the gallery, but, if you just want to take a look around, go straight up to the second floor. All the main works of Martini, Lorenzetti and Buoninsegna are there, along with 17 wooden statues by Jacopo della Quercia.

Osteria Le Logge (Via del Porrione 33). This is not the classic Tuscan osteria: its menu includes some of the most typical dishes of the region, completely renovated though to create something unique. It could be expensive, mostly depending on your choice of wine, but the starters are simply sublime.

Antica Osteria del Divo (Via Franciosa 35). Now, this is on the other hand what you would call a proper osteria, with a slightly unusual atmosphere though. Jazz music plays in the background, making your dinner even more pleasant. Choose one of the tables in the basement: this cantina dates back to the Etruscan period! Osteria del Divo serves mostly meat and traditional Tuscan specialties. Great starters.

Enoteca Italiana (Fortezza Medicea). This elegant wine shop is located inside a sixteenth-century building, in an area once used as ammunition depot first and dungeon then. Here you can buy a bottle or have a glass of wine in the charming backyard along with a selection of cold cuts and cheese. 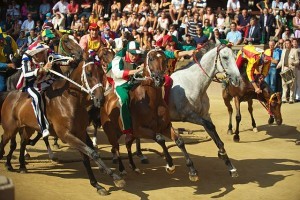 The race for the Palio takes place two times a year on July 2 and on August 16, you can see the show right from the square, but be warned: saying it will be “crowded” is an understatement. The cafés in Piazza del Campo rent “seats” on their terraces for 350 – 400 € on the day of the race, you can place a reservation at the Tourist Office, at least a few months in advance. Keep in mind that on the days of the Palio hotels will get pretty expensive, raising their fares by 10% to 50%.