Siena cathedral or Duomo is one of the most iconic buildings of the Italian Gothic, and the centre of a complex that includes also the Battistero and an ancient crypt. The Duomo is open everyday and allowance costs just 3€. 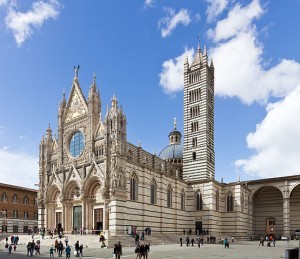 The building of the church began in 1215 and went on until 1300 and beyond. The majestic facade in white, green and red marble was designed by Giovanni Pisano; the statues that adorns it are copies, the originals are on exhibit at the Opera del Duomo museum.
In 1339 the Council of Siena decided to start the woks to enlarge the church: the original building was meant to be the transept of the new church, that would have been one of the biggest in Italy and in the whole Europe. The project was abandoned in 1348 bacause of the black plague epidemy: the remains of the so-called Duomo Nuovo can be found in Piazza Jacopo della Quercia, beside the Eastern walls of the church.

The interior of the church is astonishing: the walls and the columns follow the same motif of the facade, while the vaults are painted of a bright blue and decorated by yellow stars. The pavement is adorned by 56 panels picturing biblical and historical events, created during different periods: some of the oldest and most famous are the Ruota della Fortuna (the wheel of fortune), and the Lupa senese con i simboli delle città alleate (Sienese wolf with the banners of the allied cities). Many artists in the Middle Ages and then during the Renaissance contributed to the enlargement of the collection of panels of the Duomo, unfortunately most of the times only a few panels are visible, since some of them are covered to be preserved from damages and consumption.

Another spot not to miss is the pulpit, made of marble and porphyry, created by Nicola Pisano and Arnolfo di Cambio: the wonderful sculptures of the pulpit makes it one of the masterpieces of Italian Gothic. From a door on the North end of the aisle you’ll get to the Piccolomini Library, where frescos painted by Bernardino Pinturicchio portray a few events in the life of the future pope Pio II.

Opera del Duomo museum. The museum annexed to the church hosts some of the artworks that once were part of the decor of the Duomo Among them you’ll find the original statues of the philosophers and the prophets that were once part of the cathedral’s facade. Looking straight at them you’ll notice they’re out of proportion, that’s because the sculptor Giacomo Pisano, created them to be seen from below.
The star of the museum surely is Duccio di Buoninsegna’s Maestà painted as altarpiece; the rear panels remained unfinished, while they were meant to portray the passion of the Christ.

Battistero di San Giovanni. You’ll find the Battistero right behind the Duomo, at the end of a steep stairway. The baptistery is adorned by wonderful frescos, but the 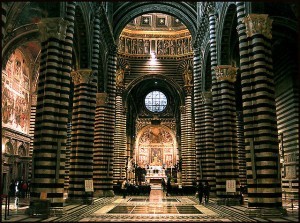 highlight here is the hexagonal baptisimal font, created by Jacopo della Quercia and decorated by bronze tiles made by various artists, among them Lorenzo Ghiberti and Donatello.

Cripta. The ancient crypt beside the Battistero has been discovered only in 1999: in the 14th century it had been filled with rubble, and it had to undergo a meticulous work of renovation. Its walls are completely covered by fresco-secco paintings dating back to the 13th century portraying biblical scenes such as the passion of the Christ and the crucifixion.