Monte Argentario is a promontory that peeks out from the Southernmost part of the Tuscan coastline. It was once an isle, then connected to the mainland by the isthmus of Orbetello. The whole area is a natural park, but its beaches can get quiet crowded during summer. mostly because Argentario became over time one of the favourite beach destinations for families from Rome and Northern Lazio.

A quick tour of Monte Argentario

You can get here taking the Via Panoramica from the coastal road, just after Orbetello: this panoramic road follows the circular perimeter of Argentario, allowing you to get a wonderful view of the coast and the sea, with the shape of Isola del Giglio outlined in the distance.

Porto Santo Stefano and surroundings. The main town of the area is Porto Santo Stefano: crowded and expensive are sadly the two adjectives that come to the mind thinking about it, at least during summer. Grab something to eat for lunch and then head to the inland, or visit one of the many beaches you’ll find driving both Eastward or Westward leaving the town.

Porto Ercole. In the less popular region of Argentario lies the town of Porto Ercole, guarded by three fortress built by the Spanish. Take a walk across the old town centre and follow the street that leads to the little Sant’Erasmo church and then to the biggest of the fortress.

Il Pellicano (Lo Sbarcatello, Porto Ercole). Il Pellicano is a famous 5-stars hotel, whose restaurant boasts 2 Michelin stars – just 3 more restaurants in Tuscany can boast such a recognition. If you’re a gourmet you cannot miss it.

A trip on Isola del Giglio

Isola del Giglio is the second biggest island of the Tuscan archipelago. This isle doesn’t owe its name to liliums (gigli in Italian), but to wild goats that live in the inland and to their Latin name: aegilium. Recently the island became sadly more famous than before bacause of the Costa Concordia disaster, but now the wreck of the ship has been successfully removed.
Except for three little hamlets, the isle stays pretty wild, and that’s its true beauty: the landscapes that Isola del Giglio has to offer are breath-taking, you’ll love to get lost in its inland at least as much as you’ll love its beaches.

Giglio Porto. This is where ferries arrive, and where Etruscans founded the first town on the island in 1200 BC. Today the port of Isola del Giglio is a charming 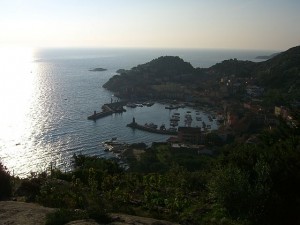 seaside resort: its small colourful houses, the little trattorias, the church and a tower that overlooks the town, everything is perfect, but that’s all there, so take a seat in one of the cafés and plan your visit to the isle, then it’s already time to move on.

Giglio Castello. Once you get here it won’t be hard to imagine what this little town looked like back in the Middle Ages. Giglio Castello is framed by stonewalls, that hide the fascinating little houses with their red roofs and the paved alleys. Entering from the main gate turn right to get to Piazza XVIII Novembre and reach the West wall, from which you can enjoy a spectacular view. The other attraction of the town is the St. Peter’s Church, where you’ll have the chance to admire the crucifix created by the Tuscan sculptor Giambologna using ivory and wood.

Giglio Campese. The newest town of Isola del Giglio is known for its beautiful beach, the biggest on the island. From here you’ll get quite a view, with the islands of Montecristo, Elba and Corsica outlined in the distance.

The best beaches on the island

The most beautiful beach on the island is surely Campese beach, a stretch of golden sand framed by Punta Faraglione and the Torre Medicea. The second beach you cannot absolutely miss is Cala dell’Arenella, with its slightly pink sand, located North of Giglio Porto; and then there’s Cala delle Cannelle, a wonderful beach of white sand, pretty crowded in summer.

The best way to enjoy a trip to Isola del Giglio, anyway, is to go on a hike following one of the 33 hiking paths of the island; some of them lead to hidden little bays, that will reward your efforts with their natural beauty and quiet.