Except for Florence, Pisa is probably the most famous town of Tuscany and one of the most famous of Italy. The city owes its fame to the iconic Leaning Tower, but there’s much more to discover here. Since 15th century the town is one of the most important centres for education in Europe: its most famous universities, Scuola Normale Superiore and Scuola Superiore Sant’Anna, to this day, are among the most important education institutions in Europe. Therefore a big part of the population around here is made of students, and that’s why the cost of living as well as the prices of the most central cafés and bars are pretty below the average if compared to Florence or Siena. 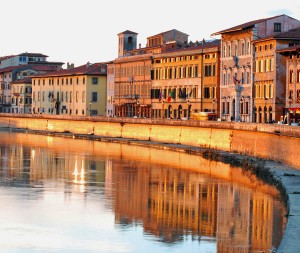 During the Middle Ages Pisa was one of the maritime Republics of Italy, and a rival of Genoa and Venice, competing for the dominion over the Mediterranean Sea. In the 10th century the naval fleet of Pisa reached the Far East to establish a stable commercial route, that brought silk and spices in Italy. During the 12th and 13th century the Republic of Pisa reigned over Corsica, Sardinia and on the Tuscan coast. Many historic buildings in town date back to that period and follow a characteristic variant of the Romanesque style called “romanico pisano”.
Pisa later passed under the dominion of Florence in 1406: the Medici family did a lot for the town, which owes to them the construction of the University, where the most famous scientist from Pisa, Galileo Galilei, taught.
During World War II the 40 percent of Pisa’s old town has been completely destroyed, luckily enough Piazza dei Miracoli survived, and is today the main attraction in the city.

Lungarno. Most of the tourists spend just a few hours in town: they come to see the Leaning Tower, they have lunch and head back to Florence or to some other town in the area. The best thing you can do in Pisa though is walking along the Arno river, admiring the ancient buildings that overlook it on both sides. North of the river you’ll find Piazza Cairoli, with its multitude of bars and cafés; from there you may take then Via Cavour and start a tour of the alleys to spot little trattorias, perfect for lunch or dinner.

Santa Maria della Spina. Located on the Southern bank of the river, this deconsacrated church built in the early 13th century hosts one of the masterpieces of Italian gothic sculpture, the Madonna col Bambino (also known as Madonna della Rosa) by Andrea and Nicola Pisano.

Palazzo Blu. This 14th century palace stands beside the Arno which reflects its beautiful blue facade, created during the complete renovation of the building in the 19th century. Inside you will find an art collection that includes the works of local artists, from the 15th to the 20th century.

Piazza dei Miracoli. This beautiful square hosts the biggest concentration of Romanesque buildings of the world, a triptych that includes, along with the famous Leaning Tower, the Duomo and the Battistero. The three buildings have all been built between the 11th and the 13th century. >Discover more about Piazza dei Miracoli

Camposanto. According to the legend the ground of this cemetery is made of the earth brought in Italy from the Golgota during the Crusades. Many sarcophagi in this fascinating monumental graveyard, located in Piazza dei Miracoli, date back to the Roman era, and have been then re-used during the Middle Ages. The courtyard was once adorned by beautiful frescos, some of which have been destroyed during World War II, the ones that survived are kept inside the Sinopie museum.

Sinopie museum
This museum hosts a collection of beautiful 14th and 15th century frescos, originally part of the decorations of the Camposanto’s courtyard. Here you’ll have the chance to admire the Trionfo della Morte (triumph of death), credited to the 14th century artist Buonamico Buffalmacco.

Sottobosco (Piazza San Paolo all’Orto, 3). No tourists around here, just students and locals. Great for breakfast and lunch, in the weekend it hosts jazz music concerts.

Il Crudo (Piazza Cairoli, 7). This sandwich joint is the best in town if you’re looking for a quick lunch, but also for a glass of wine.

Osteria del Porton Rosso (Vicolo del Porton Rosso, 11). This traditional osteria offers two different menus, one based on seafood and the other on local meat. Old fashioned and delightful.