The district of Santa Maria Novella is full of elegant boutiques and historic buildings. The central station, named after the church of Santa Maria Novella, is usual starting point of a tour of the city, since most of the tourists arrive here, by bus, train, or taxi.
Piazza della Signoria and the city centre is just a few meters away from here, but there’s no need to rush across the street and leave the district. Take your time to make a stop or two and you won’t regret it.

Church of Santa Maria Novella. The construction works of this medieval church begun in the second half of the 14th century. In 1360 the church was almost 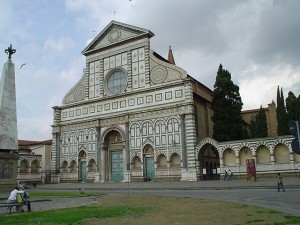 complete, but the works on the facade went on for decades. The building was completed in 1470 following the design by Leon Battista Alberti for the higher part of the facade and the entrance.
Inside you’ll immediately notice the magnificent fresco by Masaccio, Trinità, one of the first examples of the use of perspective; while in the middle of the main aisle you’ll find the crucifix created by Giotto in 1290. Visit the three chapels of the church: the one on the right of the altar is the Strozzi chapel, adorned by Lippi’s frescos; the chapel behind the altar is the Tornabuoni chapel, whose frescos were created by Ghirlandaio; on the left of the altar you’ll find the Gondi chapel, with its wooden crucifix by Brunelleschi.
Pay a visit to the museum, hosted in the halls around the courtyard to admire the wonderful Cappellone degli Spagnoli, the chapter house adorned by one of the masterpieces of Italian medieval art: the cycle of frescos by Andrea Bonaiuto.

San Lorenzo district is the territory of the Medici family: here you’ll find the buildings that hosted the members of the most important family in the history of Florence, the church and the chapels where they used to pray, and their majestic library.
The centre of the district though is surely the central market, held inside a structure built in the 19th century, crowded and characteristic.

Church of San Lorenzo. This church is one of the oldest of the city: the original building dates back to the 4th century, Cosimo il Vecchio designated Brunelleschi as

the architect in charge of the construction of the new church on the ruins of the ancient one. Brunelleschi’s project was never completed, and yet the church is one of the most harmonious building of the Renaissance. In 1518 Michelangelo realized a new project for the facade, but the works never started.
San Lorenzo, meant to serve as mausoleum for the Medici, it hosts the tombs of many members of the family indeed, and the tomb of the artist Donatello, who decorated the sacristy.

Biblioteca Laurenziana Medicea. Next to San Lorenzo church you’ll find the entrance to the courtyard, from there a staircase leads to the library, created by the will of pope Clemente VII (Giulio de’ Medici) to host the huge book collection of the family. The library itself is charming, but the true attractions are the staircase and the vestibule, designed by Michelangelo.

Cappelle Medicee. This the main mausoleum of the Medici family: here lie 49 members of the Florentine dynasty, watched over by astonishing artworks by Michelangelo. In the magnificent princes’ chapel you’ll find the tomb of Francesco I, while Lorenzo il Magnifico is buried in the austere new sacristy.

Palazzo Medici Riccardi. This palace, built by the will of Cosimo il Vecchio as the main residence for the Medici family, is the epitome of the Florentine nobiliar palace: an elegant three-storey building, a majestic construction yet far from the palace-fortress nobles used to build at the time. After 1540 the palace was bought by the Riccardi family.
The gallery on the first floor is adorned by a wonderful vault painted by the artist Luca Giordano, but the true attraction of Palazzo Medici Riccardi is surely the Cappella dei Magi, a small chapel adorned by fascinating frescos and by the famous Cavalcata dei Magi, the painting created by Benozzo Gozzoli that hides among its characters members of the Medici such as Lorenzo and Cosimo il Vecchio.