This fascinating area of Florence is overlooked by two medieval towers built during the 12th century, Marsili and Belfedrelli towers. This is the perfect place to go when you get “tired” of roaming across museums’ halls and streets full of tourists. To get to Oltrarno though you’ll have to pass through probably the most crowded bridge of the world: we’re talking about Ponte Vecchio (literally old bridge), and yes it looked that crowded even seven or eight hundred years ago!

Ponte Vecchio. This is the oldest bridge over the Arno river ever built, and the one that has been rebuilt more times than any other. Besides its apparent calm the Arno 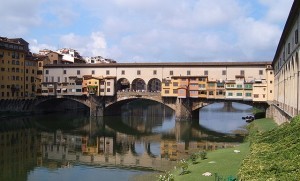 can get quite destructive indeed. The point is Ponte Vecchio is not just a bridge, as you’ll immediately notice there’s something peculiar about it: it hosts several small shops, once butcher shops, but since the 16th century, by the order of Ferdinando I de’ Medici, the shops on the bridge can only be jewelry stores.
The bridge owes its current architecture to the reconstruction works of 1345, and fortunately survived the destruction that followed the German army’s retreat during World War II.

Corridoio Vasariano. On one side of Ponte Vecchio, right over the shops, you can spot the fascinating Corrdidoio Vasariano, a covered passage, built by Vasari for Cosimo I, that connected Palazzo Vecchio to Palazzo Pitti, on the other side of the river. The whole structure is long about 1 km, and passes through the Uffizzi Gallery and the Santa Felicita church. Unfortunately visiting it isn’t that easy: guided tours (only in Italian) for up to 25 persons are available, from time to time; you can check the website www.uffizi.firenze.it to get more informations, and, if you’re lucky enough, book a visit.

Basilica di Santo Spirito. The square named after this beautiful church designed by Brunelleschi is one of the most unkempt of the city, the Basilica di Santo Spirito on the other hand is gorgeous. The interiors of the church are adorned by the works of the painters Lippi and Zanobi, but probably the most beautiful thing you’ll find inside is the monumental colonnade created by Brunelleschi using grey stone.

Cappella Brancacci. The church of Santa Maria del Carmine is located in Piazza del Carmine. Even if the original structure has been almost completely destroyed by a fire in the 18th century, luckily the frescos of one of its chapels, the Cappella Brancacci, survived and can today be admired in all their glory. The chapel can host no more than 30 visitors at the same time and booking your visit is absolutely required. Unfortunately every visit lasts only 15 minutes, an incredibly short time compared to the vastness, the beauty and the complexity of the frescos you’ll be admiring.
Among the artists who contributed to fresco the vault of Cappella Brancacci the most famous is probably Masaccio, who depicted the life of San Peter. This is one of the most important works of the artist and of the whole Italian Gothic style, since right here became evident the fracture between medieval art and a new trend that set the basic principles for a new concept of painting, paving the road for the painters of the Renaissance.

Palazzo Pitti. This majestic palace was commissioned to Brunelleschi by one of the richest families of Florence in the 15th century. The fortune of the Pitti family 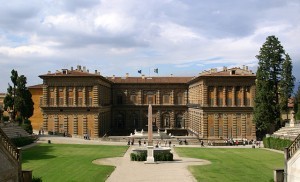 though didn’t last long enough, and shortly after the end of the construction works, Palazzo Pitti got sold to the Medici, who turned it into their summer residence. After the fall of the Medici family the palace kept being the residence of the dukes of Florence. Even when the city was designed as the capital of the Reign of Italy, for a short time, the palace became the home of the royal family.
Today Palazzo Pitti hosts several art galleries and museums. The Museo degli Argenti is worth a visit at least for the beautiful frescos that adorn its halls, once used as consultation rooms by the Medici.
Raffaello’s and Rubens’ works enhance the beauty of the Galleria Palatina’s collection, on the first floor of the palace. Visting this gallery you’ll admire paintings by Lippi, Botticelli, Caravaggio, Giorgione and Tiziano. Passing through the Sala di Venere you’ll get to the royal apartments, kept exactly the way the Savoia family left them in 1891.
The second floor of Palazzo Pitti hosts the Modern Art Gallery of Florence: its collection includes mostly works that date back to the 18th and 19th century.

Giardino di Boboli. This verdant garden created following the design by the architect Niccolò Pericoli in the 15th century is located right behind Palazzo Pitti. Exploring it is a true pleasure: you’ll get happily lost along its boulevards. The Viale dei Cipressi is adorned by 170 statues, while Giambologna’s Venus stands out among the waves of the Grotta del Buontalenti, an artificial grotto named after its creator. Inside Boboli you’ll also find an amphitheatre and a botanical garden. Get to the limits of the garden to admire the breath-taking view of the Florentine countryside. With the same ticket bought to visit the Boboli garden you can also access Giardino Bardini, a smaller and less known garden with its own charm: stop by the wonderful Caffè Belvedere, located inside the park in a stone loggia that overlooks the city and get a coffee or an ice cream, the view here is fantastic.