Framed by historic cafés and dominated by the majestic Palazzo Vecchio, Piazza della Signoria has been the centre of Florentine society for centuries. This has been the centre of the world during the golden age of the Medici’s government over the city.
In the middle of the square you can see the statue of Cosimo I de’ Medici, created by the sculptor Giambologna, while near Palazzo Vecchio you’ll surely spot a small crowd of people, taking pics of another statue: don’t get fooled though, despite the appearances, that’s not the original David by Michelangelo, but just a copy made in 1910 (the original is currently on exhibition at the Galleria dell’Accademia).

Looking across the square, from the palace, you’ll see the Loggia dei Lanzi: walking across its arches you’ll have the chance to admire three masterpieces like the Ratto delle Sabine, by Giambologna, the bronze statue of Perseo, created by Benvenuto Cellini, and the Sette Virtù, a masterpiece by the medieval sculptor Agnolo Gaddi.

You’ll pass by Piazza della Signoria more than once during your visit, but find the time to come back around 7pm, and look for Caffè Rivoire, the most famous café of Florence, to have an aperitivo before dinner.

Palazzo Vecchio. The building has been the seat of Florence’s government since the early 14th century, when it was built along with the Tower of Arnolfo on its top. Palazzo Vecchio witnessed all the events that marked the history of the city.
In 1540 Cosimo I chose the palace as ducal residence and asked Vasari to renovate the interns. Shortly after the renovation though the duke of Florence decided to buy 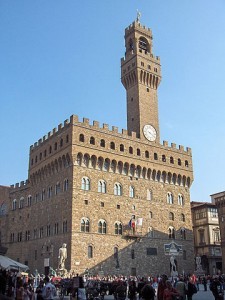 another palace, Palazzo Pitti, to be used as summer residence, and eventually moved there with his family, after the death of his wife Eleonora. Since then the ducal palace has been known as Palazzo Vecchio, “the old palace”.

Visiting Palazzo Vecchio could make you better understand the complex history of the city, especially if you’re planning to join one of the guided tours. Don’t miss one of Michelangelo’s masterpieces, on the ground floor: a statue named Genio della Vittoria, created for the tomb of pope Giulio II but left unfinished, and found in the atelier of the artist after his death.

The main attraction of the building is surely the extraordinary Salone dei Cinquecento, seat of the Council of the 500, who ruled the city at the end of the 15th century.

The construction works started in 1296, the building was completed then 150 years later; the neo-gothic facade though has been created in the 16th century to replace the original, still unfinished. The dome of the church is one of the most famous architectural masterpieces of the Renaissance, and has been designed by Filippo Brunelleschi and realized between 1420 and 1436. Brunelleschi got the inspiration from the Pantheon of Rome, but his dome is actually made by 2 concentric octagonal domes. To truly admire this unique piece of architecture climb the 463 steps of the spiral staircase that will lead you on the top. While climbing the stairs take a break once you get to the balustrade and admire the astonishing frescos of the Giudizio Universale over your head, the brilliant result of the work of two artists: Vasari and Federico Zuccari.
From the top of the dome you’ll get a wonderful view of the whole city, mind though, to get to the top you could wait for a long time in the queue. Far more easier is getting on the top of Giotto’s bell tower, beside the cathedral: on the top of the 414 steps staircase another unforgettable landscape awaits you.

The triptyque of Santa Maria del Fiore is completed by the Battistero, an octagonal building with three entrances: one of them is the famous Porta del Paradiso (Heaven’s door), made of 10 bronze panels and considered the most important artwork of Ghiberti. Once again though the ones that adorn the Battistero aren’t the original bronze panels the sculptor realized at the beginning of the 15th century: to see the original panels, along with a variety of artworks that once adorned the 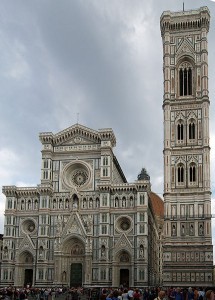 interior of the cathedral, are on exhibition at the Museo dell’Opera di Santa Maria del Fiore.

Uffizzi Gallery. The Palazzo degli Uffizzi hosts one of the most important art collections of the world. The building itself is a piece of art created by the celebrated architect Vasari. The Uffizzi Gallery is huge, it’s the Louvre of Italy, you won’t be able to see all of it in just one visit. If it’s your first time there you have to focus on the art of the Renaissance: here you’ll have the chance to see masterpieces like Botticelli’s Spring or the Birth of Venus, Leonardo Da Vinci’s paintings as well as Michelangelo’s, the famous Tondo Doni among them, and Raffaello Sanzio’s works, just to name a few. Discover more about Uffizzi Gallery

Galleria dell’Accademia. Expect a long queue out of this art gallery, a museum created specifically to give an appropriate home to the most famous sculpture of all times: the David. The statue created by Michelangelo Buonarroti is the star of the show, but the collection includes works by Ghirlandaio, Botticelli, and many more.

Via de’ Tornabuoni. This is the street of the fashion boutiques: here you’ll find only the best, from Prada to Ferragamo, Ferré, Armani and Gucci. This is where you want to go for the shopping while you’re in town.
Walking along Via de’ Tornabuoni you’ll eventualli get to Piazza Strozzi, named after the 15th century palace, once the residence of the merchant Filippo Strozzi, one of the historic rivals of the Medici family. Palazzo Strozzi hosts a variety of exhibitions and events throughout the year.