Livorno is a classic port town, with a charming old city centre crossed by a 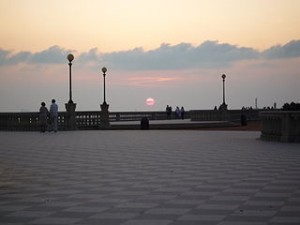 dozen canals. It will hardly captivate you at first sight, if you get to know its streets though and truly live the town, you’ll learn to love it.

From the Middle Ages, through the Renaissance, and especially between the 17th and 18th century, the city has been constantly growing and became one of the main ports on the Tyrrhenian coast of Italy. During World War II, being a strategic asset of the fascist regime, Livorno has been heavily damaged by the bombings. The reconstruction that followed has been focused on funcionality more than aesthetic principles.

A tour of the city centre. Your tour of the town should start from the Mascagni Terrace, on Viale Italia, a wide terrace of black and white tiles with stone banisters, overlooking the seaside. The terrace was built in the 1920s and it was originally named Ciano Terrace, after the fascist leader Costanzo Ciano. Walk along the seaside to reach the Northern end of the terrace. On your side you’ll see Livorno’s Aquarium, while keeping on walking and getting across the bridge of Via Borra you’ll reach Piazza dei Domenicani. The one you’ve just enetered is the district of Little Venice, crossed by little canals built in the 17th century. The square hosts St. Catherine Church, the cathedral of the town; follow its perimeter to the Scali del Refugio, where you’ll find an old fatiscent building with pale green shutters: this is Teatrofficina, the centre of Livorno’s nightlife, with a packed schedule of happenings, events and live concerts. 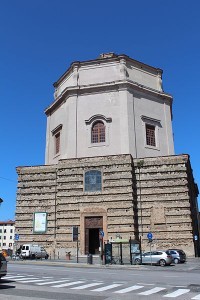 Little Venice district is framed by two majestic buildings, Fortezza Vecchia and Fortezza Nuova (the Old and the New Fortress). Both built under the Medici’s dominion, this two frotress date back to the 16th century. The Old one has been built 60 years prior to the New on the remains of an 11th century building, and today is cut through by cracks along its external walls. The New Fortress is the one you want to visit, at least to take a walk across its park: nothing more than that to see inside, but allowance is free. The whole district has a shabby-chic look, with little wine bars and elegant cafés along the towpaths.

On the wine and olive oil road

Livorno is the starting point of an enogastronomic itinerary of the Etruscan Coast called the Wine and Olive Oil road. The whole itinerary extends from Livorno down to Piombino and to the Elba, twisting and turning through wineries, farms, vineyards and olive groves. Along the road you’ll have the chance to taste and buy the specialties of the area. Detailed informations are available on the official website.

L’Ancora (Scali Ancore 10). This place is truly wonderful: its dining hall has been created inside an old 16th century boats warehouse, and the terrace overlooking the canal is simply charming. Here you can get a wonderful caciucco, but the specialty of the house is the carbonara di mare, spaghetti with sea food.
La Barrocciaia (Piazza Cavallotti 13). It won’t be easy to find, but it’s surely worth the effort. La Barrocciaia lies hidden by market stands in Piazza Cavallotti; getting a table here could be hard, but once you do you’ll undestand why locals and tourists love this trattoria/sandwich joint. The menu changes so frequently it would be hard to suggest something you must absolutely try, but regardless of what you eat we assure you won’t be let down. The atmosphere is as great as the food: paintings on the walls and the traditional Tuscan cordiality will set you in the right mood to enjoy a wonderful meal.